A brief history of the Private Press Movement

The term ‘Private Press’ is often used to refer to a movement in book production that flourished around the turn of the 20th century, heavily influenced by William Morris and Emery Walker. They felt that books should be considered as a work of art besides being a medium for the dissemination of information, and should be produced using traditional techniques of paper-making, printing and binding. As an offshoot of the arts & crafts movement, it represented a rejection of the cheap mechanised book production methods of the time. Only high quality materials were used: handmade paper, traditional inks – and often specially designed typefaces. Careful consideration was given to page margins, typefaces, illustration and binding. The books were typically bound by hand.

The Kelmscott Press was established by William Morris in 1891. Morris (1834-1896) published his own work as well as translations and reprints of mediaeval writing he believed should be read. 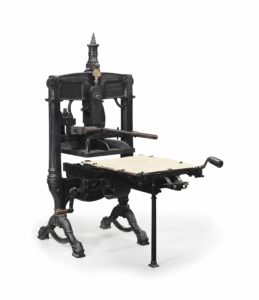 The first Kelmscott publication was The Story of the Glittering Plain (1891), written by Morris. For The Golden Legend (1892) Morris designed a special typeface which he named ‘Golden,’ and for  The Recuyell of the Historyes of  Troye (1892) he designed ‘Troy.’

His acknowledged master work was The Works of Geoffrey Chaucer with its own typeface, known as ‘Chaucer’ but it is, in fact, identical to ‘Troy’ but in a reduced size. Its 87 illustrations were from the hand of Edward Burne-Jones, and were engraved by William Harcourt Hooper.

This book brought together two of Morris’s great passions: his love of medieval literature, which inspired the subjects and style of much of his own writing, and his socialist philosophy, which looked back to a time before mechanisation and division of labour had destroyed, in his opinion, the personal fulfilment and social function of meaningful work. 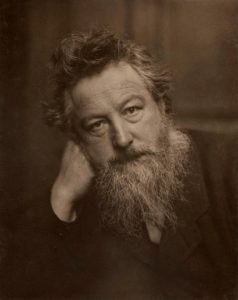 The Kelmscott Press used the ‘Improved Albion Press No. 6551,’ a hand press almost seven feet high, weighing over 2,000 pounds, made in 1891 by Hopkinson & Cope in England.

With the death of Morris in 1896, some work in hand was completed, and the final publication was A Note by William Morris on His Aims in Founding the Kelmscott Press (1898).  Despite the painstaking effort put into each publication and the fact that Kelmscott was only in operation for seven years, it managed to produce more than 18,000 copies of more than 50 different works. A list of titles and descriptions can be found at http://lib.guides.umd.edu/c.php?g=327129&p=2197782

Several other significant private presses produced fine works. Among these, notably but exclusively, were the following:

The Essex House Press was founded by C.R. Ashbee, who also ran the Guild of Handicraft.  Ashbee bought the Albion printing presses from the Kelmscott Press following William Morris’s death, and employed several of the Kelmscott compositors. The Essex House Press moved from London to Chipping Campden with the Guild of Handicraft in 1902, and produced 84 titles.

The Doves Press was founded in 1901 between T.J. Cobden Sanderson and Emery Walker. Before that date Cobden-Sanderson, a friend of William Morris, had established a book binding workshop that bound many of the Kelmscott Press books.

The Ashendene Press was founded in 1895 and continued until 1935, with a break during the First World War from 1915 to 1920. C.H. St. John Hornby was a partner in W H Smith & Sons who set up his own press to print books for his family and friends. Ashendene books are often in very small print runs, and were sold through a subscription service. Unlike the product of Kelmscott Press and Doves Press, many of the Ashendene books have elaborately tooled leather bindings.

The Vale Press was founded by Charles Ricketts in 1896 for which Ricketts designed the very fine ‘Vale’ typeface. In its relatively short life (it closed in 1904), the Vale Press produced forty-six books, all printed at the Ballantyne Press in London. The Ballantyne Press had a hand operated press and a press operator skilled in its use set apart for the work of the Vale Press. The publisher George Allen also made use of Ballantyne’s hand press for a number of his arts & crafts inspired titles in the 1890s. 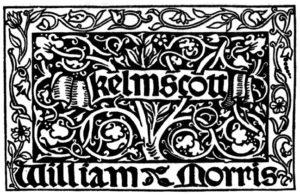 The Chiswick Press was started in 1811 by Charles Whittingham to produce cheap editions of the classics but when his nephew, also named Charles, took it over in 1838 he began to revive old typefaces and seek ways to improve the quality of printing. Whittingham printed a number of works for both William Morris and Emery Walker and his brother-in-law Robert Dunthorne in the 1880s. The Chiswick Press continued until 1962. The Chiswick Press also was used by George Allen for some of his specialist arts & crafts titles.